Per Jonasson re-elected President of AREA

On 14th May 2016, Per Jonasson was re-elected President of AREA for 2 years on the occasion of the AREA General Assembly spring meeting in Dublin. The AREA Board remains relatively stable with only one person change.

21 out of 23 members gathered in Dublin on the occasion of AREA spring General Assembly meeting hosted by the Institute of Refrigeration Ireland. Per Jonasson was unanimously given another two-year mandate and Coen van de Sande (NVKL, the Netherlands) was nominated Vice-President. Wolfgang Zaremski (VDKF, Germany) took the position of Treasurer.

Marco Buoni (ATF, Italy), who is representing AREA at many events and meetings worldwide, was given the title of Vice-President International Affairs. This decision reflects the key position of Mr. Buoni, who has notably played an important role in deepening the cooperation with UNEP.

Stig Rath (VKE, Norway) joined the Board as Director in replacement of Peter Bachmann (BIV, Germany) who left after 6 years. Members expressed their thanks to Peter, who contributed to AREA’s work and value, especially by strengthening the collaboration with Chillventa. Stig has been involved in AREA for several years and currently chairs the Task Force Skills. 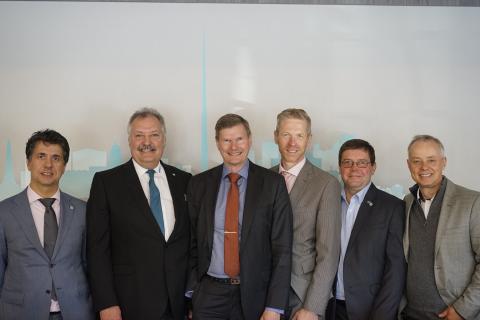