Replacing your heat pump in an environmentally friendly way

The market for replacement of air-to-air heat pumps is growing steadily. As heat pumps are being replaced at end of life, it is important to ensure that the fluorinated greenhouse gases heat pumps contain are recovered and collected properly and in an environmentally friendly manner.

The Norwegian Heat Pump Network - a Norwegian network for reducing building and construction waste of which AREA member VKE is part - has made films and brochures aimed at consumers who want to replace their old heat pump. "It is important that both the HFC gas and the heat pumps are safely handled and well taken care of so that they can be reused as much as possible", emphasises Stig Rath, leader of the project.

The film encourages consumers to contact F-gas certified installers when replacing the heat pump both for recovering used gas and for installing a new unit. "Those who have an F-gas certificate can now get paid for their certification", continues Stig Rath.

"When the gas is recovered properly, the rest of the heat pump is to be delivered as electronic waste into the return system. Then, as many of the components as possible can be reused or recycled", says Rannveig Ravnanger Landet, director of the Construction Industry's National Association and leader of the NHP network. Heat pumps contain, among other things, copper which is important to recycle.

The film can be viewed HERE.

The brochure can be downloaded in the Publications section of AREA website. 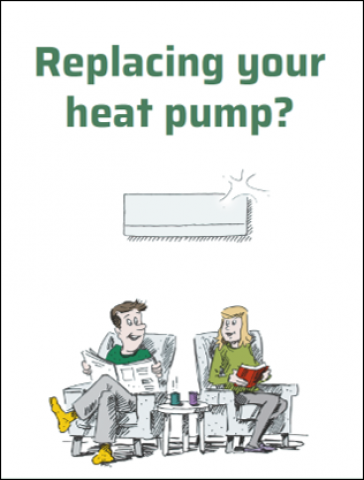